This page is intended as a quick reference to solve some of the problems that are commonly encountered when developing within the Abinit project.

How to generate the configure script via makemake¶

Abinit uses the standard configure && make approach to build from source. Note, however, that the developmental version does not contain the configure script. To generate the configure script and the other files required by the build system, you need to execute makemake:

makemake requires a recent version of the python interpreter as well as m4, autoconf, and automake. If these tools are not installed on your machine, you need to compile them from source or use your preferred package manager to install them. I usually use the conda package manager and:

Remember to run makemake every time you add/remove a Fortran file or a new directory or you change parts the buildsystem i.e. the files in ~abinit/config.

Developers are invited to build the executables inside a build directory i.e. a directory that is separated from the source tree in order to keep the source directory as clean as possible and allow for multiple builds. I usually use the naming scheme: _build_[compiler_name] for the build directory and an external file (e.g. gcc.ac) storing the configuration options that can be passed to configure via the –with-config-file option:

Note that the name of the options in the config-file is in normalized form that is:

For instance, --with-mpi-prefix in normalized form becomes with_mpi_prefix. Examples of configuration files for clusters can be found in the abiconfig package. A detailed description of the configuration options supported by the build system is given in this guide by Marc:

Once the build is completed, it is a good idea to check whether the executable works as expected by running the tests in the v1 directory with:

to list the available options. A more detailed discussion is given in this page. 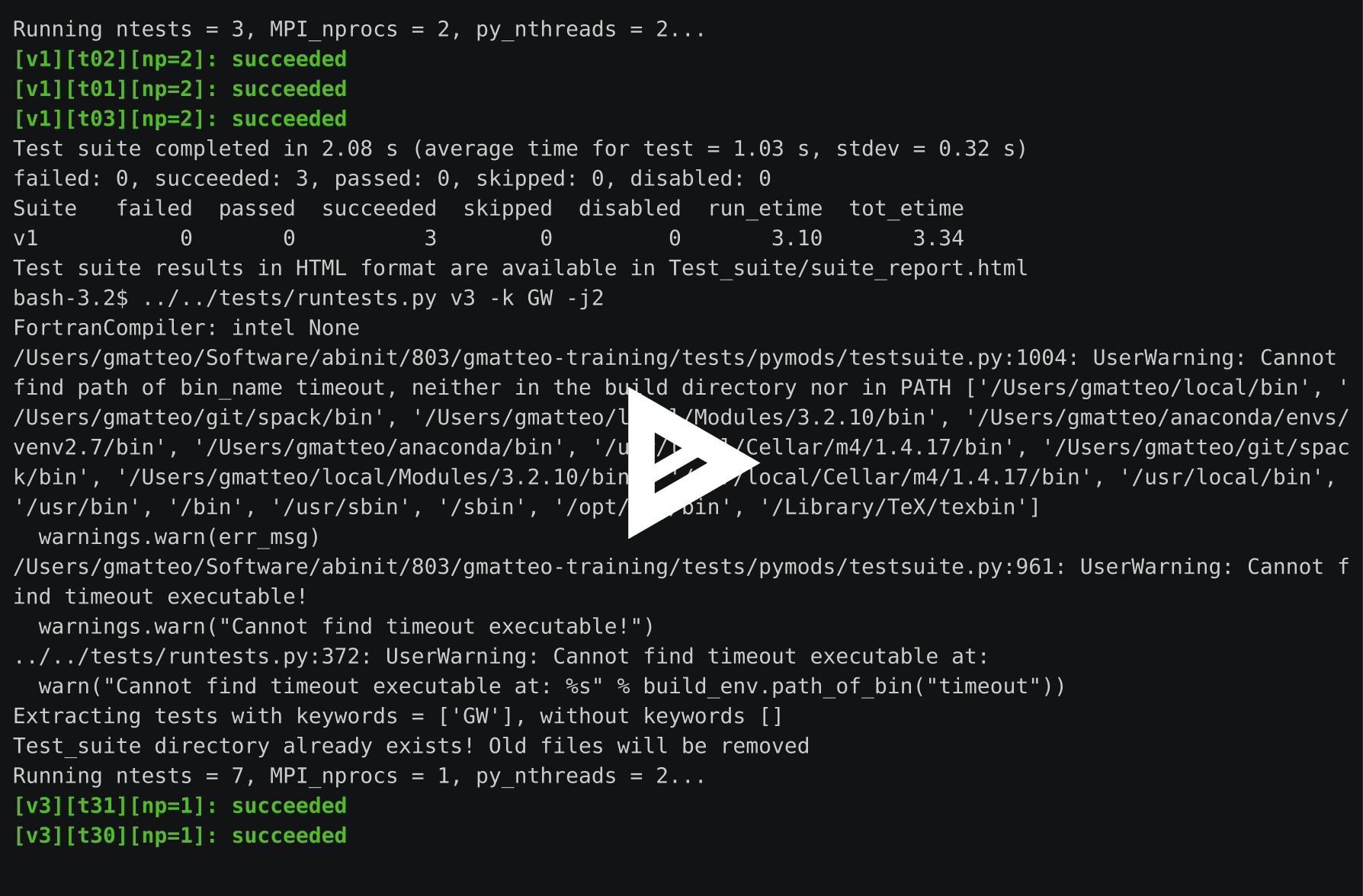 Remember to run the tests as frequently as possible while developing new features in order to spot possible regressions or incompatibilities. Trust me, you can save a lot of time if you run runtests.py systematically!

How to browse the source files¶

The HTML documentation generated by Robodoc is available at this page.

If you need a tool to navigate the Abinit code inside the editor, I would sugest exuberant-ctags.

To generate a tags file containing the list of procedures, modules, datatypes for all files inside ~abinit/src, use:

Now it is possible to open the file containing the declaration of the dataset_type Fortran datatype directly from the terminal with:

Inside the editor, you can go directly to a tag definition by entering the following in vim command mode:

More tips for vim users are available here. For emacs see this page.

Finally, one can use the abisrc.py script in the ~abinit directory.

How to debug with gdb¶

Load the executable in the GNU debugger using the syntax:

Run the code with the gdb run command and redirect the standard input with:

Wait for the error e.g. SIGSEGV, then print the backtrace with:

Remember to compile the code with the -g option. Avoid debugging code compiled with -O3. In some tricky cases, you may need to resort to -O0 or use Fortran print statements to avoid miscompilation.

For a more complete introduction to gdb, we suggest this youtube tutorial:

How to add a new Fortran file¶

How to add a new Abinit input variable¶

This section documents the procedure required to add a new Abinit input variable. To make things as simple as possible, we ignore the (more complicated) case of dimensions such as nkpt or nsym whose value may depend on the dataset. To add a new variables follow the below steps:

since you broke the ABI of a public datastructure and all the object files depending on this datastructure must be recompiled (if you are developing a library, you should release a new major version!)

No, it’s not a typo, ABIs and APIs are two different concepts! From this answer on stackoverflow

If you expand, say, a 16-bit data structure field into a 32-bit field, then already-compiled code that uses that data structure will not be accessing that field (or any following it) correctly. Accessing data structure members gets converted into memory addresses and offsets during compilation and if the data structure changes, then these offsets will not point to what the code is expecting them to point to and the results are unpredictable at best.

How to add a new test in the test suite?¶

In order to introduce a test, one needs to:

The different fields control how strictly the test results will be analysed:

If this procedure fails, contact the code maintainers in order adjust the test case. This might mean modifying the tolerances files. Unless you are really expert, let the maintainer do the final adjustment.

Please, try to keep preferably the total time per test case to less than 10 seconds. 30 seconds is a maximum for most test cases. Going being this needs exceptional reasons.

Supposing now that you have introduced a new test case. It can be used, with the other tests of the ABINIT test suite, through different channels:

In computer science, code coverage is a measure used to describe the degree to which the source code of a program is tested by a particular test suite. A program with high code coverage has been more thoroughly tested and has a lower chance of containing software bugs than a program with low code coverage. Many different metrics can be used to calculate code coverage; some of the most basic are the percent of program subroutines and the percent of program statements called during execution of the test suite. We aim that the test suite covers all the functionalities of ABINIT.

How to trigger a coverage report?

There is one slave dedicated to on-demand execution of branches by the developers that produces a code coverage report, at present, higgs_gnu_7.3_cov. It can be launched by the general on-demand interface (contact Jean-Michel or Xavier if you do not yet have access to it). Code coverage reports from recent runs of the tests are available here. If you see parts of the code which are not well tested, please contribute to improving coverage by writing new tests!

How does it work?

ABINIT is built with special options such that every function that is executed in the program is mapped back to the function points in the source code. A .gcno file is generated when the source file is compiled with the GCC -ftest-coverage option. It contains information to reconstruct the basic block graphs and assign source line numbers to blocks. More info are available in the Gvoc page. A .gcda file is generated when a program containing object files built with the GCC -fprofile-arcs option is executed. A separate .gcda file is created for each object file compiled with this option. It contains arc transition counts, and some summary information. Finally, we use lcov to analyze the .gcda files for generating a html report

How to fix Robodoc warnings¶

The following section is aimed at helping developers to solve problems related to robodoc error messages. It comes from the file doc/developers/robodoc.doc.txt

A robodoc section must always start with a “begin marker” and end with a “end marker”. In ABINIT, the begin marker is usually:

while the end marker is always

A common problem when generating .html for ABINIT thanks to Robodoc, is the lack of an end marker for each begin marker. The solution is simple: find the end of the robodoc section (often, either the end of file, or just before the next begin marker), and insert

How to make the parents script happy¶

The script parents relies heavily on the Robodoc-type structuration of the source file. In particular, a source file should be made of sets of robodoc blocks, possibly separated by comments or blank lines.

In most of the source files, one block relates to a subroutine, typically:

The most common source of errors comes from the fact that the parent.pl script expects the name_of_subroutine to be coherent in the three above occurrences. In this case, you should get something like:

For example, the following will generate an error

It will be easy to correct this piece of code:

Unfortunately, in some ABINIT source files, the number of such blocks can be large (bigger than 10), and the above-mentioned error message does not mention the line where the error was found, neither the subroutine for which there has been a mismatch. How to find the place where the error occurred?

In the full list of messages obtained when executing

one can find the list of block in this source file for which make parent succeeded.

The suggestion is thus to examine the list of blocks or subroutines (e.g. grep ‘end subroutine’), and proceed by elimination: the one that failed is the only one who did not succeed. Sorry if this procedure is not very nice.

Q2 How to debug if a section of the source file disappeared?

Answer: Well, it is likely that you have forgotten the keyword

after the section CHILDREN.

in the src directory, one can get several types of messages. However, they are not always very indicative of what should be corrected. Here follows a set of hints to fix the problem identified by abiauty.

The script abiauty relies heavily on the structuration of the source file. In particular, after a section where variables are declared, abiauty expects the following line:

In the above mentioned case, such a line was missing at the line 138 of the file 32_util/interpol3d.F90, preventing abiauty to understand the structure of the file.

More explicitly, here is the old section (that does not follow the abirules):

And here is the new section (that follows the abirules):

Q1: How to debug ABINIT when he following diagnostic is obtained

Simply, you have not mentioned the name of the routine at the “end subroutine statement”. So, in the routine name_of_routine.F90, replace:

Q2: How to debug ABINIT when the following diagnostics are obtained

There are some fundamental limitations of the abiauty script, moreover accompanied with a diagnostic that is of no help.

(1) abiauty cannot treat an “if” statement, followed by a conditional that is split on two lines, with moreover, a comment at the end of the first line. E.g. it cannot treat:

You can choose between different possibilities avoid this problem:

(2) in certain cases, abiauty cannot treat a “call” that appears immediately after a “if”. E.g it cannot treat:

(3) abiauty cannot treat a “enddo” that appears on the same line than another command thanks to a “;”. E.g. it cannot treate:

Suggestion: examine first the ‘semicolon found at line 102 with do statement’ error message.

Q3: How to debug ABINIT when the following diagnostic is obtained:

Following the abirules, one should not have the following syntax:

The instruction should instead appear in the line following the case condition: